Back to Sheep home page 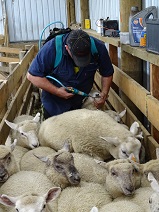 Best practice is all about maximising drench efficacy to get best results and ensuring the drenches you use will be there for years to come.

There are many tools available to us to help improve the sustainability of drenches, and today, they mostly involve everything except drenching! In the past with effective drenches, it was easy to rely on the drench to take care of the parasites. But if resistance is present or if you want to delay resistance occurring on your property, other techniques need to be engaged.

On farms that have triple drench resistance, parasite management has had to evolve away from reliance on drenches and employ other tools available, and this can result in better production than before. How do they achieve this?

Primarily, the changes revolve around feeding. Improved quantity and quality of nutrition negates many aspects of parasitism. It also minimises larval uptake as animals aren’t pushed to eat as low to the ground. Using other stock classes to remove larvae, so pastures aren’t as contaminated is also beneficial. Adult ewes can follow lambs and/or cattle can follow sheep. Those pastures are often much less ‘wormy’ than sheep or lamb only pastures. Another way of minimising larval uptake is the use of crops. Parasite larvae prefer grass pastures, therefore root or leafy crops are less suitable for their survival.

Monitoring is a key aspect as well. Checking that the animals are wormy before treating and that the drench has worked as it is supposed to, is easy to do. At the same time as these tools are being used, you can breed worm resistance and/or resilience into you flock by purchasing rams that have breeding values for Worm FEC or resilience. Employing these methods can greatly reduce the reliance on drenches over time. And then it comes down to what drench and when to use them?

Young lambs (and calves) are the worm factories on the farm, so keeping on top of their egg output is critical. In normal conditions, a regular four weekly drench programme using an effective short acting combination should be used. If worm challenge is particularly high, tactical use of a longer acting product like Cydectin® Oral for Sheep, can maximise growth rates, to get prime lambs off the farm faster. Likewise, if the farm is too wormy in autumn, a longer acting drench at that time can be useful to protect lambs while challenged. Long acting drenches should be used carefully, as they can speed up drench resistance if mismanaged. Other tools should be employed to mitigate these effects, such as using an Exit drench.

Certain drenches can be used strategically as a Quarantine (Q) treatment to prevent resistant worms entering your property, as an Exit treatment and a Knockout (KO) in the autumn. The best Q and KO drenches are the ones that are the most effective with the least resistance to them, of which Startect® is one.  Learn more about strategic drenching here.

There are practical ways parasites can be managed without resorting to drench in the way we have in the past. It just involves a bit more planning and thought but can result in better production and longevity in the future. For more information get in touch with one of the Zoetis Veterinary Advisors.