Teatseal provides protection immediately after infusion at dry off by physically plugging the teat canal. It remains in place until removed at calving.

How long does it stay in the teat canal?

Teatseal has been shown to remain in the teat canal for at least 20 weeks post infusion.

What trial work has been conducted (in NZ/worldwide) to show it works?

There are numerous trials in NZ and overseas that demonstrate the effectiveness of Teatseal used on its own or in combination with antibiotic DCT. For more detailed information on these studies please contact Technical Services on 0800 650 277.

How does combination treatment (antibiotic dry cow therapy and Teatseal) compare to long acting antibiotic alone, such as Orbenin® Enduro or Cepravin®?

Local and overseas (UK, US, Canada and Australian) studies have shown a reduction of approximately 30-50% in pericalving mastitis by using Teatseal in addition to a long acting antibiotic alone. This approach has been shown to be of particular value in high SCC cows and where a long dry period with high environmental bacterial challenge at calving can be expected.

Does it matter which long acting dry cow antibiotic I use in combination?

Studies have been performed with two long acting formulations and both found significant reductions in mastitis when Teatseal was added to the antibiotic DCT. See combination therapy page for more information.

Can Teatseal help reduce my SCC?

What kind of results can I expect in heifers?

In a formative large scale Waikato study, Teatseal administered to heifers 4 – 6 weeks before calving was shown to reduce Streptococcus uberis infection at calving by 84% and reduce clinical mastitis in the first 2 weeks of lactation by 68%.

How long before calving can I treat maiden heifers?

Approximately 4 weeks prior to planned start of calving or as recommended by your veterinarian.

Administration guidelines are available from Zoetis or your vet clinic.

How does Teatseal get removed after calving?

At the first milking, hand strip each quarter 10-12 times to remove any remaining Teatseal. Stripping should commence at the very top of the teat to ensure all product in the teat canal is removed. Do not use the milking machine to remove Teatseal residue.

Are there any problems with calves suckling Teatseal?

Calves ingesting Teatseal do not have any problems. There have been occasional reports of some calves having trouble suckling Teatseal treated cows. Whether this is due to the Teatseal or that the calves had a weak suckle is not known. A Massey University study showed that Teatseal ingestion did not affect the calf’s colostrum intake.

Does Teatseal have a withholding period?

How should I manage a Teatseal treated cow at her 1st milking?

At the 1st milking after calving, strip each quarter 10-12 times to remove any remaining Teatseal. Stripping should commence at the very top of the teat to ensure all product in the teat canal is removed.

How many cows does one bucket treat?

Teatseal comes in 120 syringe buckets. Each cow requires 4 tubes, one for each teat.

With a herd of over 1000, Dale from Southland shares his success with Teatseal. 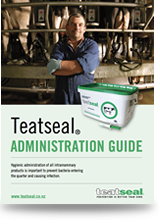 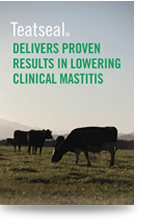